With the arrival of HDTV 1080P display capability here at the Lair, it became a matter of necessity to embrace 1080P HDV shooting as well. As such, I did quite a bit of research since last November and had been following HDV for about 2 years prior to that.

To make a long story short, I settled on the Sony HVR-V1U. See sample footage, and stills extracted from the progressive scan footage HERE. This camera needs generous lighting, but when available, it delivers stunning "30 digital photos per second" quite literally. See the still images captured from the video in the right hand column of the sample footage page for yourself. When shooting frames that look this good, it rather eliminates the need to carry a still camera along with this high definition video camera.

I've been a closet shutterbug almost all my life, but until recently, with the advent of computer post-production, I've kept that interest a distant second to my audio interests. Things are changing now.

Last summer, my wife and I went shopping for a digital still camera. We studied, researched and talked to other owners of digital cameras. Since I was interested in keeping the expenditure small, I looked for a good break point where visual quality was best just before the price curve takes that steep upward rise into the the rarified world of professional cameras.

I think we did quite well. We ended up landing one of the last produced Olympus C2000Z cameras (when a friend of ours, impressed with the photos our C2000Z took, tried to buy one too, he quickly found that no online stores had them and that they were discontinued.) We paid $473 for ours at Digital Kingdom. They tried to slam-dunk us into buying a lot of extra addons, and I agreed to a package, which they never shipped (but billed me for). I wrote them a stern FAX and a couple of e-mails, plus several phone calls and got my credit card refunded for the unshipped part. Close call. I'll be more careful to check www.reselleratings.com from now on before buying anything online.

Anyway, the C2000Z delivers excellent photos. I'm going to be replacing the photos I took with my 34-year old Pentax Spotmatic and those taken with my old RCA VHS camcorder and then frame grabbed with my TARGA32 capture card, with images taken with the Olympus camera eventually.

And Then There Was Video... 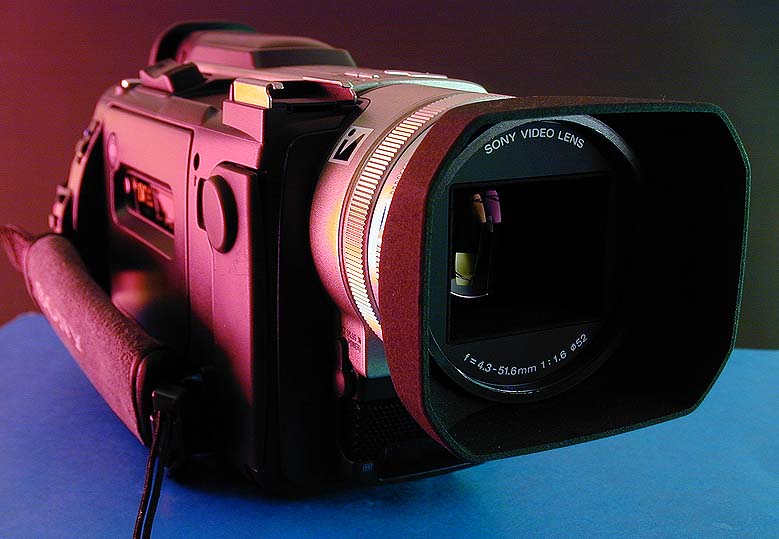 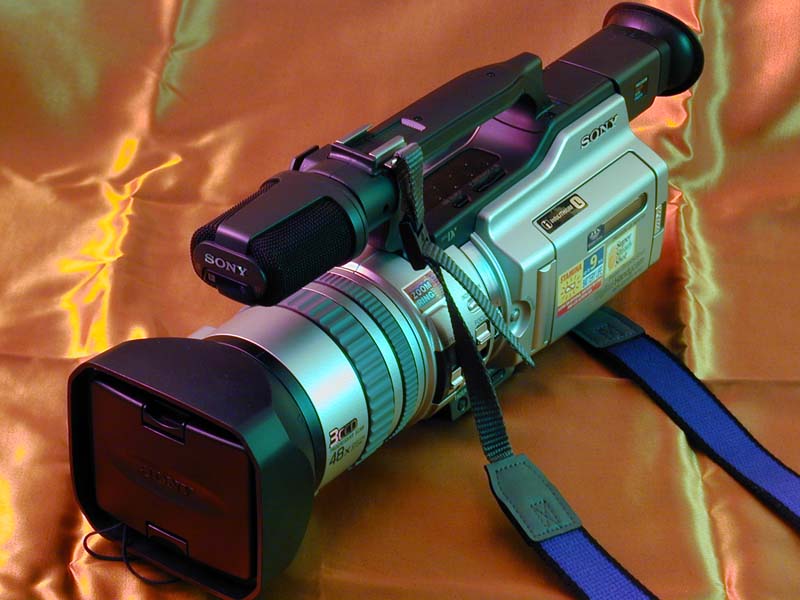 At the end of August, we wanted to do some creative stuff on the computer with video. At the same time, a client needed a 3-minute segment from a program video added to their web site. So I researched capture cards and came up with a Dazzle Digital Video Creator II, the MPEG-2 version of an earlier product. We had a bear of a time getting it working, but once we did, we managed to create some of the best looking internet RealVideo I've ever seen.

After that project was completed, we began to think about doing more with the capture and editing capabilities. And I was also getting the itch to get a decent, compact camera. A trip to Flushing NY last summer had me witnessing brave souls out there with their JVC and Panasonic subminiature DV camcorders and I never forgot that sense of capturing the world so easily. In late November, my wife and I decided it was time to get a DV cam ourselves.

We read some online reviews and initially were impressed with what people were saying about the Canon ZR10. So we went to Circuit City and tried one out. We had been there a month earlier, trying out several DV cams to get our feet wet. We bought the ZR10 and a service contract.

Why did we buy a contract? Because DV format is so small, so delicate and so impossible to fix by yourself, that you'll save yourself a lot of grief if you get the "insurance" of a good service/maintenance contract. We also chose Circuit City because of the no restocking fee policy on camcorders.

When we got the ZR10 home, one of the first things I used for a subject was the Christmas tree. Well, neither of us were impressed at all. I've got a dozen 75W PAR floodlights in my livingroom. Half of them were on and this camera didn't have enough light to produce a clear picture. There was much noise and the tree was just a dusty green smudge. In bright light, edges had an artificial black border around them. The picture looked like a photo that someone had interpolated up from a lower resolution, added gaussian noise, then unsharp masked. It looked highly-processed is what I'm saying. We kept the unit for two days and then decided it wasn't worth $849, when our VHS camcorder actually produced better pictures than this thing does.

The salesman at Circuit City was very nice (he must have been new) and very helpful. He even suggested a store that sells mainly HDTV stuff, just down the road and gave me a contact there. We went there, talked to the salesman, and looked at their lineup of DV cams. They had the Sony VX2000 and the Sony TRV900, as well as a bunch of single-chippers. I found both Sonys to be in another league altogether. The VX2000 was impressive-looking, but considering that my wife and I like to travel to Asia a lot, it wouldn't fit in our carry on luggage very well. Since the TRV900 produced a picture that looked for all intents and purposes, identical to the VX2000, we opted to get the TRV900. 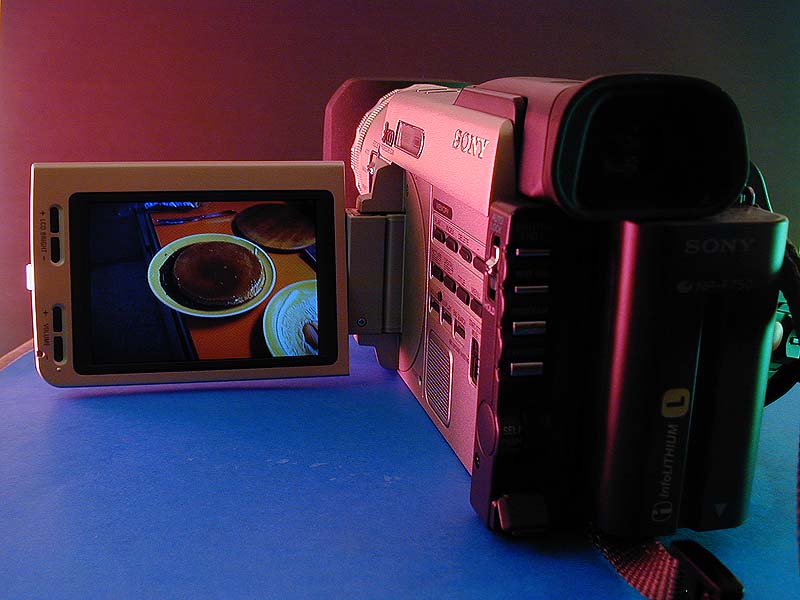 Of course, we opted for a contract just in case. Two years was just $99. We negotiated the price down to the mid $1900 range and were happy enough with that. (It was a blow to have to nearly triple our budget after finding out the ZR10 and other single-chip DV cams were not designed to produce great quality images, rather favoring small size and digital effects, and of course, Fire Wire in/out.) We realized we had two choices: either forget video as a hobby, or spend enough to get a professional camera. Since my wife said "buy it!" the decision was simple. :-) 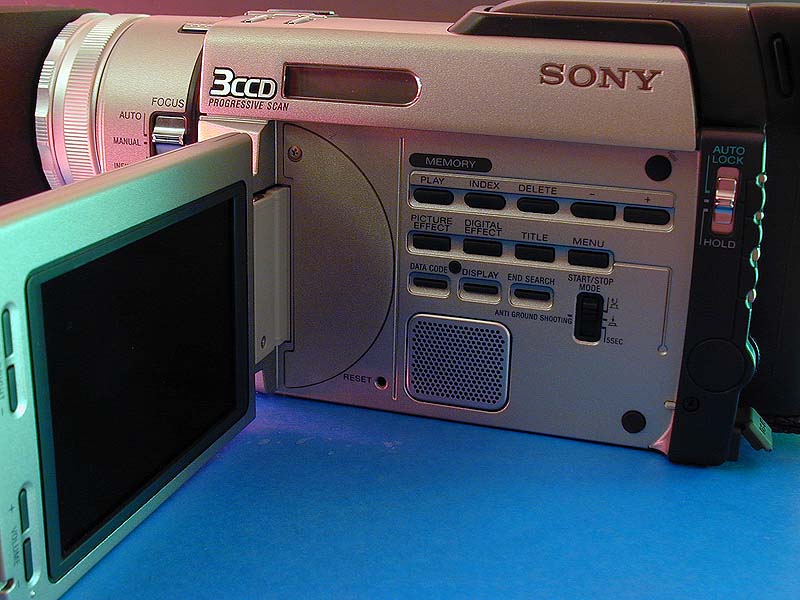 Our first night with the TRV900 proved rewarding. And every time thereafter, wherever we shot video, day or night, indoors or out, we became more impressed. The nighttime footage we shot from our car was at least as good as the footage on the TV show "COPS" --very impressive. Last night (12/13/2000) we went to Rockefeller Plaza in New York to see the Christmas tree. We shot some great video. Earlier that day, we went to Flushing and Queens NY and shot more video. Being audiophile natured, I hate automatic gain control. So I turned that feature off, using manual levels, set at mid-gain. Well, that produced a stunning quality soundtrack. When we played this video back into my friend's home theater, complete with a very large direct view CRT and a surround sound system, I was quite stunned at both the quality of the images and the naturalness of sound. The dynamic range was awsome. An overhead train passed as we were under the tracks, and that sent everyone for cover when that scene played! The rumble of the buses, their diesel engines, as well as the sounds of sirens of fire engines on 34th street, proved to be real waker-uppers that evoked the exclamation, "YOU ARE THERE!" from my friend. The sound recording is stereo, 16-bit sampled at 48kHz, fed by what appears to be a pair of above-average condenser mics. For more of my commentary on the TRV900, click HERE.

I like this camera not only because it completely fulfills the vision of a "reality capture" device, but because it's got so many manual override features and gives the user a great deal of control over the picture. I also like the fact that my wife can carry it under her coat, concealed and we can shoot video in places, discretely, where we could not normally bring a camcorder at all.

All in all, I haven't found any disadvantages with this camera that can't be overcome with techniques. It's a great value for a pro quality camera under $4000, and a bargain at half that price. 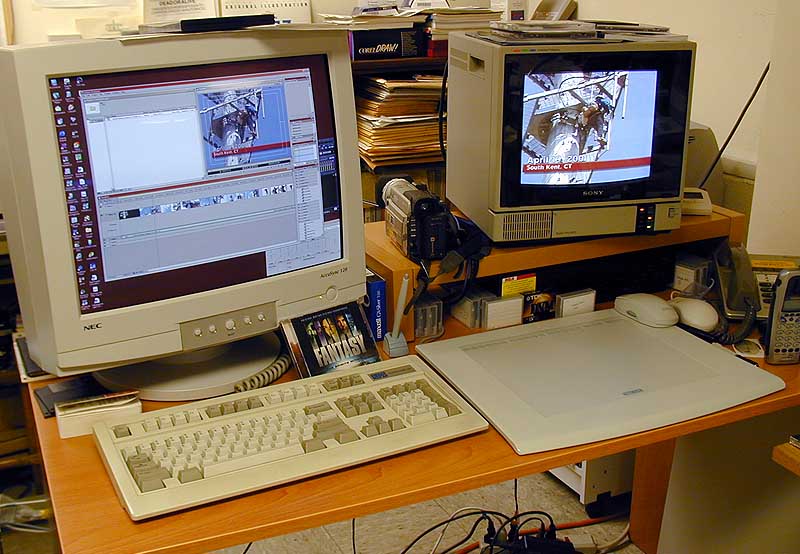 Here is a view of my NLE setup. The TRV-900 makes this possible without fancy and expensive capture cards. The PC sits on the floor next to the desk. It's based on Gigabyte's GA-7DXR mainboard and uses an AMD Athlon XP™ clocked at 1750Mhz and a gigabyte of DDR-SDRAM. The XP processor flies! I currently have only two drives installed and have not set up the RAID yet, but 80GB has been adequate for the projects I've done so far. The PC has a CD-RW and a DVD-RW drive (Pioneer A03), on which I have made numerous DVDs for home viewing and sharing with friends. I expect to do my first commercial project this spring. The PC monitor is a NEC AccuSync 120. I must commend NEC for developing a superb CRT. It looks fantastic at 1920x1440 pixels! The tablet is a Wacom. This is another terrific tool that works well. Using it in Fractal Painter really lets the creative spirit soar. Overall, I am really pleased with this setup, running on Windows 2000. Authoring DVDs had a steep learning curve, but once past, I find it a matter of routine to knock off new titles now.